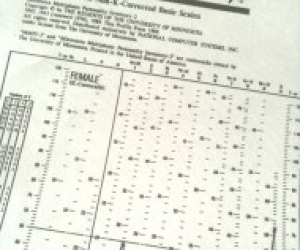 The MMPI is currently commonly administered in one of two forms — the MMPI-2, which has 567 true/false questions, and the newer MMPI-2-RF, published in 2008 and containing only 338 true/false items. While the MMPI-2-RF is a newer measure and takes about half the time to complete (usually 30 to 50 minutes), the MMPI-2 is still the more widely used Test because of its existing large research base and familiarity with psychologists. (Another version of the Test — the MMPI-A — is designed exclusively for teenagers.)

What Does the MMPI-2 Test?

The MMPI-2 is designed with 10 clinical scales which assess 10 major categories of abnormal human behavior, and four validity scales, which assess the person’s general test-taking attitude and whether they answered the items on the Test in a truthful and accurate manner.

The older MMPI-2 is made up 10 clinical subscales, which are a result of answering certain questions on the Test in a specific manner:

While there are dozens of additional content scales that have been independently developed around the MMPI-2, these are the core 10 scales used by the test.

The MMPI-2 is not a valid measure of a person’s psychopathology or behavior if the person taking the Test does so in a way that is not honest or frank. A person may decide, for whatever reasons, to overreport (exaggerate) or underreport (deny) the behavior being assessed by the test.

There are additional content and validity scales that have been developed independently from the core MMPI, but often scored by a psychologist who is administering the test. This article describes only these core scales used in the MMPI-2.